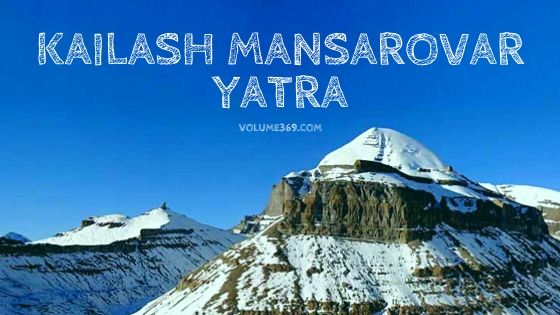 [vc_row][vc_column][vc_column_text]About 30 Million years old, the altitude of 6675 meters high in Tibetan Region Kailash Range is one of the most sacred and difficult peaks to climb in the world. Mount Kailash and Kailash Mansarovar are the major part of it. Mount Kailash is regarded as the Center of Earth (Meru) and Biggest Man-made Pyramid.

Every year number of tourists and trekkers from every part of the world come here to take the blessing of God and do some adventure but a few thousand are able to do the Kailash Mansarovar Yatra.

No matter you’re Hindu, Jain or Bon but Kailash Mansarovar Yatra perhaps the dream for everyone. No one wants to miss a once in a lifetime view of religious lakes and adobe of Lord Shiva according to Hindu Mythology. Each religion have a separate believes about Mount Kailash and that makes it more sacred.

Kailash Mansarovar is the largest freshwater holy lake fed by Kailash Glaciers located near Mount Kailash in the Autonomous Range of Tibet and China. The lake is considered as sacred in all religions Hinduism, Bon, Buddhism and Jainism. And it is considered that Lake Mansarovar purifies the evil of people and wash out five things Greedy, Anger, stupid, Lazy and envy.

Kailash Mansarovar is located in western Tibet Prefecture, it is over 1200 KM from Lhasa and 32 KM away from Mount Kailash. As compare to Mount Kailash Kora, Lake Mansarovar Yatra route is less difficult. The road around Mansarovar is very good which allows you a lovely walk and a beautiful view of lake and Nature. There is no particular starting and endpoint of Mansarovar Yatra but usually, pilgrims start from Chiu Monastery. You will get five monasteries around the lake like Chiu Monastery, Langbona, Seralung, Trugo and Gossul Monastery.

The weather around the lake is one of the coldest in Tibet. In Jan, Feb, Nov and Dec the roads are covered by the snow. But April to October is considered the best time for Yatra when weather becomes warm and suitable for Yatra. July and August are rainy season with strong wind so it would be better to pack accordingly.

Don’t except for multi-star hotels, here you will get basic accommodation like a guesthouse, monasteries and you can camp yourself. Food is also basic, no vegetable and fresh meat in local or maybe the price is quite high. So it’s good to pack some snacks and fruits from Lhasa.

The best and easier route to reach Mansarovar is via Kathmandu in Nepal via Flight and Lhasa in Tibet or from China by Tibet by Train or Flight. Once you get there your tour operator will get you Mount Kailash.

Interested in Kailash Mansarovar Yatra Here is Guide: How to get to Mount Kailash and Kailash Manasarovar

The Ministry of External Affairs has declared the two routes of this Yatra; One is from Lipulekh pass (Uttarakhand) which includes trekking and its cost is estimated at around 1.6 lakh per person. The duration of the yatra is 24 days which conduct in 18 batches of 60 pilgrims, each batch including 3 days in Delhi for preparatory work. The route passes through some beautiful and sacred site like Narayan Ashram, Om Parvat which has the natural occurrence of Om by Snow.

The second route from Nathu La Pass (Sikkim) is motorable and best for an aged persons because no serious trekking involved. It estimated to cost around 2 Lakh per person and a duration of 21 days with 3 days in Delhi for preparatory work. This route passes through some beautiful places like Hangu Lake, Tibetan plateau and others as well.

Mount Kailash is located in Tibet Autonomous Region in China. So the people living there are 90% Tibetans and the rest are Chinese and Nepalis. And the language used there is standard Tibetan language. You may also see people talking in Chinese and Nepalese as well.

According to Hinduism, this lake was created in the mind of Lord Brahma before it manifested on earth, “Manas” means mind and “Sarovar” means Lake. And also who drink the water of Lake will go to the adobe of Shiva after death. According to Hindu theology there are five sacred lakes called Panch Sarovar; Mansarovar, Bindu Sarovar, Narayan Sarovar, Pampa Sarovar and Pushkar Sarovar, it is also mentioned in the Shrimad Bhagavata Purana.

According to Bon, it is a holy place of Zhang Zhung Meri’s sacred deity. And Buddhist associate this lake with legendary lake Anavatapta where Maya is believed to have considered the Buddha. Jain relate this lake with the first Tirthankara, Rishabha.

Each face of Mount Kailash is considered to be made up of jewels like Ruby, Crystal, Lapis Lazuli and Gold.

God come to take a bath in the Lake: According to some strange believes in Brahmamuhurta from 3 AM to 5 AM God comes to take bath in the lake.

According to a myth Queen Maya took bath in the Lake by God before Siddhartha (Buddha) born.

Hindu Mythology says that one dip in this lake can wipe out of your sins from the last 7 births.

One circumference (Parikarma) of Lake Mansarovar can wash you sins for forever and if you do it 108 times then you can attain Moksha or Nirvana. But it is very difficult!!!

Kailash Mansarovar is one of the holiest lakes in the world with many religious and mysterious facts of all four religions. So come here and take a holy dip inside and wash out all your sins. If we miss anything then let us know in below comment section.

What is the cost of Kailash Mansarovar from India?

Can I take bath in Mansarovar?

A big yes! Hindu Mythology says that one dip in this lake can wipe out of your sins from the last 7 births. People from all over the world come here to take bath in lake mansarovar.

What is the Age Limit for Kailash Mansarovar Yatra?

People From age 18 to 70 are eligible for the Kailash Mansarovar Yatra.

What is there in Mansarovar?

It is places where Lord Shiva live with his Wife Goddess Parvati. Kailash Mansarovar is a sacred place in all four religions. It is believed that one circumference (Parikarma) of Lake Mansarovar can washed you sins for forever and if you do it 108 time then you can attain Moksha or Nirvana.

5 Strange Beautiful Natural Phenomena You have to See