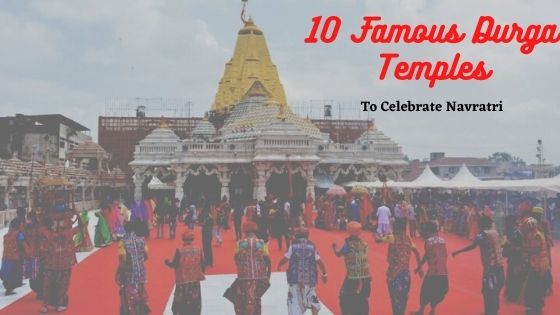 Famous Durga Temples You Should Visit Once in a Lifetime

India is a land of 33 crores God & Goddess and Maa Durga is one of the prime deity among them. There are number of Durga temples in various parts of the country. Each of them is visited by the devotee of Maa Durga, especially during Navratris.

The arrival of winter is an indication of various religious festivals and cultural celebrations. And Navratri is one of the main Hindu festivals which is celebrated for 9 days especially in Northern parts of India. During this time most of the devotee observes 9 days fast and each day has its significant meaning. Navratris is the best time to visit the Durga temple. So here is the list of most popular Durga temples in India during Navratri: 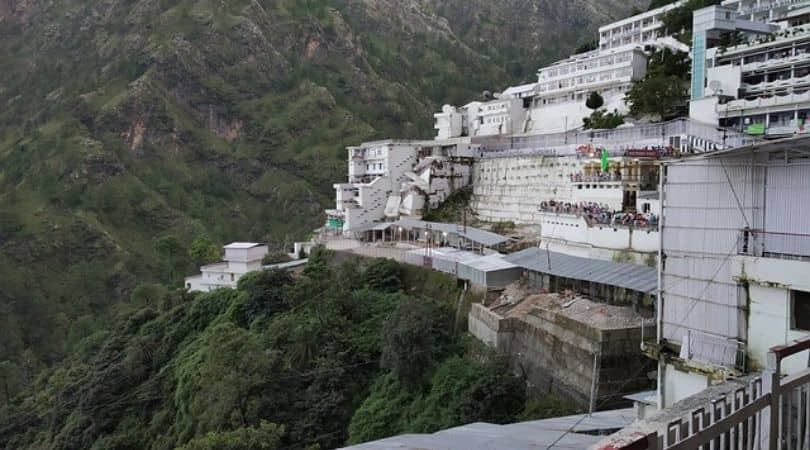 The Vaishno Devi cave is Situated at the top of Trikuta Hill at a height of 5200 ft in the Katra region of Jammu and Kashmir. According to the legend, Maa Vaishno Devi was incarnated on earth as of Shakti (power) of Goddess Parvati, Laxmi and Saraswati for the welfare of humanity.

It is believed that those who complete Vaishno Devi yatra with full faith, Vaishno Devi clean away their sins and help them to attain moksha.

Vaishno Devi temple is accessible throughout the year but the march to October is the best time to visit. Read More Chamunda Devi temple is one of the most sacred and famous Durga temples in India. It is visited by 1000 of devotees daily. This temple is also famous for its natural beauty set against the backdrop of the Dhauladhar mountains and the stunning beauty of Himachal Pradesh.

The idol of Chamunda Devi is flanked by the idols of Hanuman Ji and Bhairon Nath, who is considered here protector. And also the idol is wrapped in red cloth and it is considered very sacred. If you’re keen to see natural beauty under the power of Goddess Durga in this Navratri then you should visit Chamunda Devi Temple. 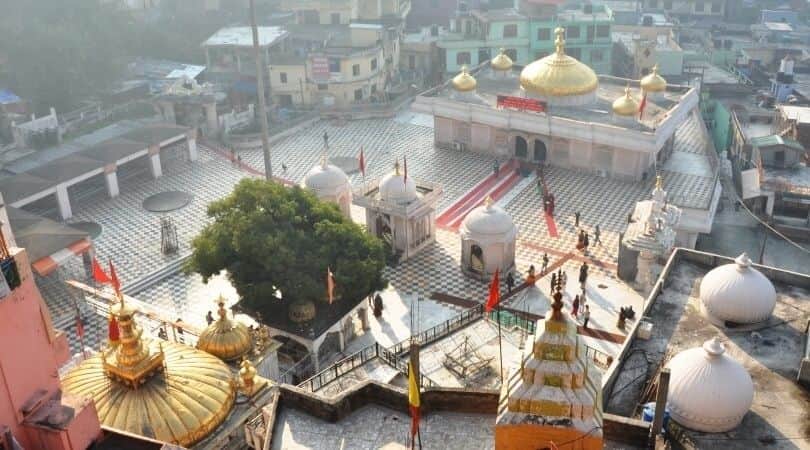 Situated in one the most beautiful Indian Destination, around 34 KM away from Kangra Valley, Jwala Devi temple is one of the most popular Durga Temple in India. This temple is dedicated to Goddess Jwalamukhi who is another form of Maa Durga.

Jwala Ji temple is famous for its natural flame which burns continuously without any fuel or assistance. There is a total of nine flames that burn from the rock without any fuel. Each flame is dedicated to nine forms of Goddess – Mahakali, Annapurna, Chandi, Hinglaj, Maha Lakshmi, Bindhya Basni, Saraswati, Ambika and Anji Devi.

Brief History: According to legend when demons creating havoc over Himalaya and harassed the gods then Lord Visnu created huge flames from the ground to destroy all of them. And from that, a girl named Adi Shakti was born who destroyed them. Jwala Ji is believed to be Adi Shakti. Guwahati trip can’t be complete without visiting the Kamakhya temple. The temple is located on top of Nilachal Hills inside a cave, towards the western part of Guwahati, on the banks of the Brahmaputra river. This temple is dedicated to the goddess Kamakhay who is believed to be the essence of female energy. It is one of the temples in 108 Shakti Peethas of Goddess Durga.

Kamakhya temple is surrounded by the 10 smaller temples and each one is dedicated to the different incarnations of Goddess Kali. The Navratri festival, Ambubachi festival and Druga Puja is celebrated here with lots of enthusiasm and during this time you can witness a huge crowd.

Brief History: According to the legend when Lord Shiva was carrying the body of his wife Sati then her yoni (genitalia) had fallen on the ground at the spot where Kamakhya temple was built. 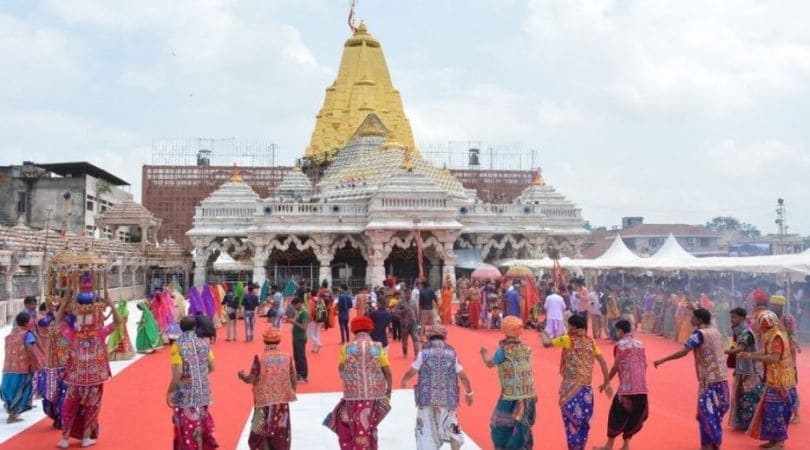 Ambaji is a highly rated pilgrimage site of Gujarat in India and the home of Amaba Mata Temple. It is located near the origin of the famous holy river Saraswati on the hills of Arasur Parvat in the Ambica forest. Amabaji town is one of the most beautiful towns in India with lots of religious places, monuments and natural beauty. This town is located at the base of beautiful Girnar mountain which makes it the best place to visit in Gujarat.

Amba Mata temple is dedicated to an incarnation of Mother Goddess. There is no image or statue of the Goddess inside the temple, the holy Shree Visa Yantra is worshiped as the main deity and no one can see the Yantra with the naked eye.

It is one of the 51 Shakti Peethas of Goddess Durga. This temple is often visited by married couples for a happy married life. Diwali, Poornima and Navrati festivals are the main highlights of this town.

Check out: Best Places to Visit in the World The Chamundeshwari temple is one of the 18 Maha Shakti Peethas, located at the height of 1000ft on the Chamundi hills with 1008 stone-cut steps leading up to it. It is one of the holiest pilgrimage sites in south India.

This temple is dedicated to the goddess chamundeshwari who is believed to be an incarnation of Maa Durga. Originally, the temple was built as a small shrine and grew to its current size under the conservation of Mysuru Maharajas.

The Chamundeshwari temple is famous for its iconic location and amazing Dravidian style of architecture. It is one of the must-visit places in Mysore.

According to the legend hair of Mata Sati fell here and later the temple was built.

The major attraction of this temple is the idol of Chamunda Devi which is said to be built by pure gold and a 16-foot high statue of the demon Mahishasure who was killed by the Goddess to protect humanity.

Check out: Top Family Holiday Destinations in the World 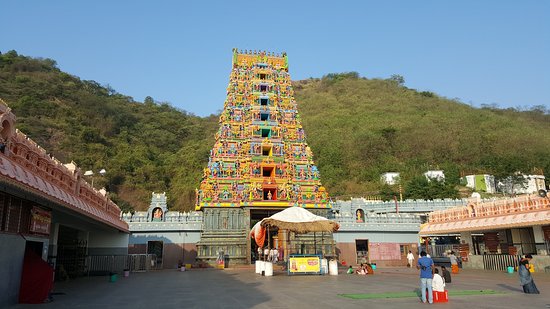 The Kanakadurgamaa temple is located on the banks of Krishna River, in the Vijayawada district of Andhra Pradesh. This temple is surrounded by the hills of Inrakeeladri and dedicated to the Kanaka Maa who is considered as an incarnation of Maa Durga.

You can find the name of this temple in various sacred text and Vedic literature. Every year people come here to show respect and seek the blessing of Mahishasurmardini. It is believed that the diety is self-manifested.

The Kanaka Durga temple is famous for its Dravidian Style architecture. That is the reason it is one of the most beautiful Indian Temple.

Since the temple is dedicated to Goddess Durga so 9 days of Navratri is celebrated here with lots of joy, especially the 10th one Dussehra.

Check out: 11 Best Things To Do in Kumarakom, Kerala Mansa Devi temple is located at top of Bilwa Parvat on the Sivalik Hills, Haridwar. It is also known as the Bilwa Tirth. The Mansa Devi temple got its name from the belief that Goddess Mansa fulfills all the wishes of her devotee. Due to that people tie a thread around the tree within the temple and untie the knot after fulfilling their wish.

According to the legend, Mansa Devi has emerged from the mind of Sage Kashyap.

Mansa Devi temple completes the trio with Siddhpeeth with Maya Devi and Chandi Devi. Due to the height, it offers a spectacular view of Haridwar City.

Located 2 Km away from Varanasi, Durga temple is one of the famous Durga temples in India. It is also known as Durga Kund Mandir and dedicated to the Maa Durg.

Durga temple was constructed by Bangali Queen Rani Bhabani in the 18th century. According to legend the main idol in the temple is self-manifested by Goddess. It is believed that Goddess Durga protects this city from negative energy.

The holy shrine sits on the rectangular tank known as Durga Kund. This beautiful temple, made in the Nagara Style of Architecture which is the main attraction of this temple. It is painted in red and ochre.

Every year a large number of devotees visit this temple and take the blessing of Goddess Durga. A popular pilgrimage attraction of Kolkata, Kalighat temple is one of the 52 shakti Peethas of India. It is dedicated to the Goddess Kali.

It is one of the best places to visit in Navrati, which is known for its majestic Durga Puja Celebration. Apart from the Durga puja, this temple is also famous for its musical & folk dance performance and various cultural events.

According to Hindu scripture, this temple is situated where the toes of the right foot of Sati fell.

Looking For Stay? Click here to get the best deals with Booking.com

Kumarakom Travel Guide – 11 Best Things to do in Kumarakom, Kerala